Cops: The Ultimate in Un-Cool 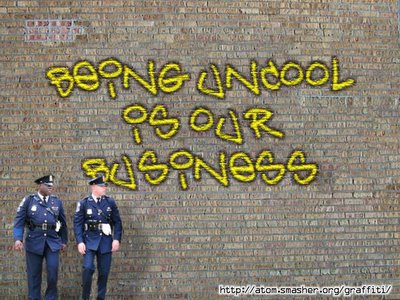 As the daughter of CPD, I can proudly trace my un-coolness to Grace & Damen (yes, there used to be a police station there!)
Eric Zorn posted this link where you can make your own graffiti-covered wall. Thanks, Eric Zorn!

So, Discovery Channel ran the movie Grizzly Man on Friday night, and Scratch and I eagerly TiVo'd. Scratch has saved all 3 hours of the movie, and commercials, just to show his friend Dennis the part where he films himself caressing the poop of Wendy, the bear who "gave (him) Downey."

Whenever I see a bear, I have this horrible audible resopnse from the movie "Look Who's Talking" where I say "It's the BEAR SHOW!" because that's what the talking baby thinks/says when a Snuggle commercial comes on TV.

This bear show? Sad, yes. Tragic? Maybe? Hilarious? Definitely. I hate to make fun of a guy who died, but watching this man's obsession was hard not to laugh at sometimes during the film. It almost felt like we were watching a 'mockumentary' and at any moment Michael McKean and Christopher Guest would come into the frame. I felt bad for him, because he obviously took his 'cause' of 'protecting' the bears very seriously, but everyone interviewed pretty much dismissed him as a semi-harmless kook, and one guy (the helicopter pilot who flew GM's remains to the coroner) actually said that he thought the Grizzly Man may have been retarded and got what he deserved. Wow.

In other news. Steelers Win! We have no terrible taaalls here at Casa de Uncool, but I'm sure a Bus jersey is in someone's future.