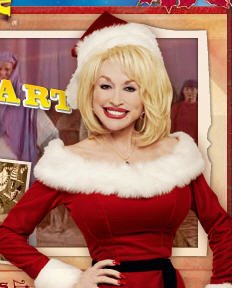 Dollywood! Yep, that's where we're going! We're flying out Saturday morning for a magical weekend in Pigeon Forge, TN. There, Scratch and I hope to accomplish several vacation goals:
So, in honor of our weekend, I present the Anti-Skiles Face. A face that makes you happy and feel good about yourself. A star that guides, if you will. Ladies and Gentlemen, I give you the Dolly Salute, Christmas style.

1. Organic Wool
I bought some hand-dyed wool at the Organic Market when I accompanied Scratch there on an outing a few weeks back. So when do you know it's all-natural? When there are little twig-like things nestled into the yarn. Like hay, or brambles, or something. Scratchy! Too bad I'm using it to make a hat, because this yarn would probably make great kitty wontons (modeled by one of skully's crew.) Or a scratching post cozy. Poor, poor recipient of this hat!

2. Knitting, in General
There's a knitting TV show. Man have I been out of the loop. Of course I have it all TiVo'd up. I haven't seen it yet, but the website calls knitting, the show, and the host "hip" about 5,000 times. That can only mean one thing: it can't possibly be hip.

3. Messing with Record Store Employees, or "This Ain't Empire Records, and you, madam, are no Liv Tyler."
I'm a music ignoramus. Scratch is a music enthusiast. So what if I accidentally call "The Wolf Parade" "The Wolf Party?" Or if I refer to Pitchfork Media as "That Website You Like?" So what is wrong with that?
Well, my new thing that I like to think about doing, but never actually do, is walk over to Laurie's Planet of Sound, the local hipsterer-than-thou cd store, where no matter what you ask for, if you ask for the coolest thing on earth, the people who work there look at you funny like you're asking for Steve & Edie and then say they don't have it. When I walk into the store, I will look around nonchalantly, and then get the attention of one of the staff, and then unleash my act by saying things like "Excuse me, where is the Wolf Party?" or "Yes, I'm interested in some comedy albums. Have you any Cosby?" And then say "Oh well, I'll just be taking THIS." and lay some kind of Sting Greatest Hits album (or equally offensive item) on the counter, pay, and leave. That Sting? He is like hipster kryptonite!
Whenever I start chortling with glee about asking a super-hipster where they keep the Young Jeezy so that I can get my snowman on, preferably in a super-phony British accent, Scratch gets this look of absolute horror on his face, because he knows the only thing keeping me from doing it is that I don't want to embarass him. But I loooove torturing him with the possibility that I could, some time, just maybe, inquire about whether they have the Primanti Brothers cd in stock because I love that song from the Sears commercial.
It keeps him on his toes.

So there's three things for you to think about.

Don't Make Me Give You the Skiles Face!

So, in the time when we weren't dressed up and attending a wedding, I drove myself insane trying to get a screen capture of the perfect "Skiles Face" - if you watch the Bulls, you know what I am talking about. It's when Scott Skiles bows his head and raises his hand to his face, like "Gaaaaaaah! You IDIOTS!" It's like anger, shame and disgust in one sweet encapsulated gesture. I could not get our computer to do it - so this is a sort-of Skiles face. Meanwhile I'll be obsessively checking Google Images to see if I can find a better one, since I can't seem to make one.

I named my fantasy NBA team SkilesFace, because I am so committed to the term. In fact, I would love to make "Skiles Face" the new "Gas Face." The Gas Face of the aughts or whatever. So the nominees for this week's SkilesFace awards are...

Which Goonie Are You?

which Goonie are you? quiz by: carrie