Somehow the weeks fly by. It's already Friday! Yee haw. I am 10 hours closer to cleaning. While the dirt devil mop n vac has not yet arrived, I have still been pretty lazy this week. I actually run through game plans in my head about what I will do first.

Mr. Whiskers, however, almost always throws some tricks in the mix, since of late he goes from puddle of cat to insane banshee in 3 seconds.

Scratch & I watched the movie Beyond the Sea last night. The one thing I wanted to learn about Bobby Darin was how he came across the song Mack the Knife and what he thought of it. Nah. I did find out that Bobby Darin looked 50 when he was 16 and was kind of an asshole.

Someday, I want to be so rich and have so much juice in Hollywood that I will be allowed to produce and star in "Cry Me a River: The Julie London Story." Nevermind that I am fat and brunette. Nevermind that the movie will skip all of her pinup years and her marriages to Jack Webb and Bobby Troup, and just be 90 minutes of Julie preparing for her cameo in The Girl Can't Help It. I want a vanity project, and I'm not going to stop clawing my way to the top until I get one! Tom Hanks would play Tom Ewell, and Jamie Foxx would play Little Richard. In a stroke of Hollywood casting, the Edmond O'Brien role would be filled by Jay Z, and he would do a hip hop remix of Rock around the Rockpile for the soundtrack only. Rockpile dust is on my shoes! I was trying to find the lyrics but I couldn't.

Wait... what? You've never seen THE GIRL CAN'T HELP IT????? Get your sorry self to a video store already. Sheesh.

This new thing I am hooked on

Because it reminds me how out of touch I am, yet simultaneously makes me feel like my opinion counts. I dare you to try it!

Is this the face of a killer? 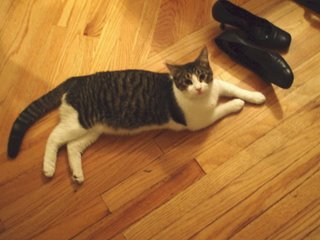 Don't be fooled. The cat is trying to kill me. Even though we have shut him out of the bedroom at night because he was sleeping on my face, he still manages to mangle me for no other reason than it's fun.

So lately, I haven't been up to much. Just working, you know... nothing blog-worthy. I mean, how many van fires does one person get? I have been reading the paper, and also just finished that Freakonomics book. Yeah, I'm a little late I guess - but it was still entertaining.

Scratch has a much more exciting life - he will be working at the Intonation Festival on Saturday! That means he could, potentially, serve a gyro to Ghostface Killa. I hope someone takes a picture if that happens. I will be at home, probably vacuuming. Such a good little wife I am huh? But honestly? That is a dream Saturday for me. Having a whole day to clean our place. Now that Senor Barbos has come along, vacuuming and sweeping have gotten much more interesting. Who knows, I may even tackle 'winter clothes pack away.' Or, I might just sit at the computer and play Cake Mania.* Who knows?

*Yes, I purchased this game before realizing it is designed for 10 year old girls. It's no Diner Dash, but hey, I've beat the game like FIVE TIMES. I can't say that about Halo.