Men of the House 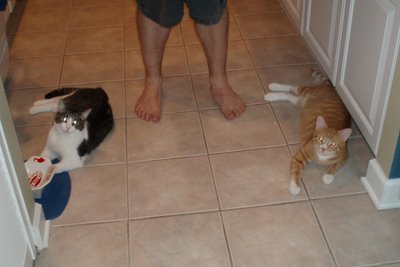 Closets Are The New Bathrooms

When Scratch & I bought our place, we looked at a lot of "new construction" style condos. The ones that don't have space for a couch, but have a steam shower and jacuzzi tub. After we bought a not-new-construction style condo, Scratch thought it might be a good idea to upgrade one of the bathrooms when we were closer to leaving, for resale value. At the time, I thought it was a sane, normal idea. But yesterday, something changed when I brought in the mail.

Do you ever get those packets in the mail that have postcards for various businesses? Like restaurants, roofing, hair removal, etc.? We got one that was sent to the previous owner of our place. I shuffled through the 20-or-so postcards to see if anything was worth keeping. And it hit me that there were SIX postcards, each advertising a different closet building company.

Who knew that six different closet companies exist? I'd heard of California Closets, don't even ask me how, but Closet Works, Closet Organizing Systems, Closet Factory, All About Closets, and Closet & Storage Concepts? All competing for the small market of homeowners with an extra 600 square feet to build a walk in closet? I don't get it. Who needs that much closet? How much stuff do you really have? Are closets replacing bedroom furniture like dressers? Someone explain it to me.

I proposed to Scratch that we turn our basement storage space into a custom closet for re-sale. He's not going for it. I think it will be fab, especially if we hire Kurt Russell to do it just like in the movie Overboard. Because then he could build a mini golf course on our small back porch! Does anyone even remember that Kurt Russell built closets in that movie? Or does everyone just remember the kid that talked like Pee Wee Herman? That movie was so ahead of its time.

Scratch saw Sonic Youth at the Double Door because he and a friend made a pact that if either of them won tickets they'd take the other one, much like a reward challenge on Survivor. I don't know why I find this so amusing.

We watched Flavor of Love 2 on Sunday night, and Scratch has deemed it 'possibly the greatest television show ever.' What other show turns someone crapping on the floor into a plot device? I'm telling you these reality show editors need to be in the Writers Guild. They earn it the hard way.

And last but not least, we added another player to our cat basketball team (now currently at 2.) We needed a mature big man for our center, so we adopted Wallace from Animal Control on Saturday. The cats are in quarantine from each other until the vet tomorrow night, so things are a little weird around here. I'll have pictures up soon enough, because I know the Interweb loves it some cat pictures!