Don't Be Mad At Your Stomach! 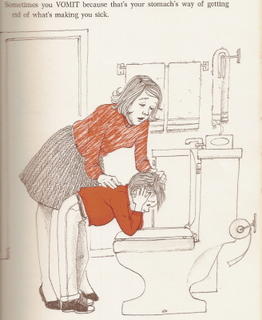 This post is in honor of one of the greatest childrens' books of all time. You're thinking "Silverstein" or maybe "Seuss" right? WRONG. Circa 1970, Ross Laboratories published the orange hardcover Minnie the Mump and Other Stories, by Paul Tripp. Illustrated by Trina Hyman. My mom worked in a doctor's office, and so we had the book.

About a month ago, I wanted the book. I think it was directly related to my hospital emergency, like I needed that book to show how much better off I was since I didn't have any visitors like:

or of course, the star, Minnie the Mump.

The illustrations are so much better than I remember them! Oh how I love this book. It's an important historical record, too - since my nephews (ages 3,5,11, and 13) will barely touch chicken pox, and have probably never even heard of German Measles. Heck, I'm 32 years old and they were practically obsolete when I was a kid.

So, for your enjoyment, my favorite illustration from the book. Have a fantastic weekend!

Well, it was a rainy trip, so no leisurely strolls through the Public Garden. But here are the highlights:

Four Seasons Boston:
Wow I love this hotel. The company I work for has a deal with them, so it's about the same price as staying at a nicer Chicago hotel instead of what they really charge. L'Occitane soaps, comfy beds, and complimentary overnight shoe polishing service by magical elves!

Dinners with Friends:
I used to love coming out to Boston to hang with my co-workers. Now they are no longer co-workers but dear friends. While here, I ate at Picco, Finale for desserts, and my favorite, Franklin Cafe! I had lunch today with my good pal Andy - so it was a great time to connect with my Boston peeps.

I'll be home later tonight, and I'm glad - because I miss Scratch and all things Scratch-tastic.

In addition to being radar-free, so my flight was super-delayed, Boston is very rainy and floody!

My favorite quote from this news article about the New Hampshire floods:

"First there was Katrina, then there was the earthquake, but this is pretty devastating right here."

I always forget that, to make a 6:30 AM flight at O'Hare, I have to be there at 5-ish, and that means leaving at 4:30, and that means getting up... you know where this is going. Scratch being ill helped, since we were both snugly tucked in around 9:15. But having to wake up in the middle of the night just guarantees no sleep for me, because I'm so positive I will not wake up that it winds up being a 4 hour catnap. Thank goodness that I have traveled so much for work that the roar of a jet engine is like a sweet lullaby to me. I'll be out cold by the time the landing gear lifts off the ground. Oh well, luxury accomodations await me in Boston. I will have no trouble sleeping tonight!

Soup Update:
So, I made some Chicken Noodle soup for Scratch. I was very pleased with myself, and he ate three bowls, and almost immediately declared himself on the mend. Kudos to ME. Yeah, I said it! Want the recipe? It's on epicurious.com which is just such a great website. We have an entire little bookcase full of cookbooks, subscribe to 4 or 5 cooking magazines, and yet when I want to make something I just hop on that site, it's got everything.

Knitting Update:
I started Scratch's hat too - I'm attempting 'circular knitting' which was just as intimidating to me as 'circular breathing.' After one twisted mess, I'm on the right track - and it was a good thing I messed up early, because the hat? Would have only fit the jolly green giant. So I'm making it smaller. I wish I could bring 'my works' with me to Boston but I'm nervous about having it confiscated, because the screeners somehow suspect I might fly into a rage and gauge out someone's eye with a 10.5 bamboo. Well, maybe, I guess. Plus, I always think I'm going to (read more, work more, etc.) while traveling but instead I just people watch and worry if I have enough for cab fare.

More from the road!

Too Bad it's not "Columbo" Day

Then I could eat yogurt from a tiny plastic spoon and tell people I had "just one more question." Get me my trenchcoat!

I'll be reporting live from Boston tomorrow-Thursday. It's going to be interesting, since the project I said I would try to have done by tomorrow? Maybe 40% done. I can't help it, this project sucks my brain dry. I won't elaborate. So I'm at home, but I'm trying to work on this thing, but I go for about 20 minutes and feel my brain cells drying out and curling up, like the Wicked Witch of the East's feet under Dorothy's house. While I'm a great 'self-supervisor,' if I think spending hours doing tedious shit is dumb, I just can't force myself to do it. So I'm kind of a bad 'self-supervisor' because I only want to do cool challenging stuff that isn't a monumental waste of time, and I can't convince myself that the task before me is somehow going to wind up being important or good or even noticed. I'm all about direct impact! Instant results!

Hmmm, alternatives. Cleaning? Yuck. Knitting? Oooh, can't get sucked in there or it will be 5:00 and I'll still be trying to figure out how to make the f-ing hat. How about SOUP MAKING? Scratch is sick, and I'm home and well (if a bit bored/not wanting to do what I should be doing) while he's sick at work. Maybe I can concoct some sort of soup remedy for his ills. I'm terrible at this stuff, but maybe a field trip to the grocery store and (later) soup simmering in a pot will motivate me to do some bizness.