I'm accustomed to spam emails being straightforward (hook up now) or creative (beat poetry word strings to get through filters) but never, NEVER would I have thought up RECIPE SPAM!

Below is the text of an email from "Vanessa" who hopes I will hook up quick, after dinner that is!

Pare and dice eggplant ""easiest place to meetSomeone nearby and hookupQuick

Too bad I have no idea how to hook up the diced eggplant with the finely minced garlic. Shucks!
// posted by Maggie @ 10:00 PM 3 comments 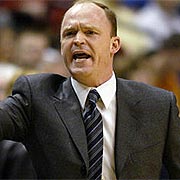 Upside-down! Admittedly, the Skiles Face has been on hiatus, because I can't kick Skiles while he's on an 8 game losing streak. But come on Scott! Three wins in a row! Smile, dagnabbit!

That's right, the guy who applies for a job, uses a sexually-themed paper as his writing sample, then doesn't get why we had a problem, then responds back to the rejection letter suggesting we reconsider, THEN refers a friend for the job. Sir, I giveth thee the Skiles Faceth!

Runners up include Wild West Wendy for having such a short free trial, LePeep for making me sick today after eating from the (supposedly) healthier menu, and the real estate market in Chicago.

Wow. Wowie wow wow. The continuing saga of the "Sex Guy" applicant, as he has come to be known...

Sex Guy sent us a new writing sample about how Trekkies are bad in society. He also sent my boss an email saying "I don't mean to be pushy but I thought I had the job, has that changed?" after our conversation about what type of content is appropriate in the workplace.

My boss sent him an email today, essentially saying, you're out of the running, we can't trust your judgement, etc. - it was pretty emphatic that he shouldn't call us. So what does he do?

He emails us. Saying how we should really reconsider him. What? Dude. Just stop.

Then, a few hours later, my boss gets an email from a friend of Sex Guy's, wanting to apply for the job!

I think Sex Guy needs to write a new essay for his future writing samples called "Surefire ways to not get a job, based on personal experience." Wow. Am I that out of line for thinking that this is embarassing? Not to be "crotchety old woman" but I had interviewed for jobs before I was 21. Heck, I was 22 when I got my current job, and had a solid work history before that. I know when to hold em, fold em, walk away, etc. Which brings me to the phrase that officially qualifies me as the oldest 32 year old woman on the earth, "What do they teach these kids at college anyway?"

Enough! I'm off to think about non-work things.