Here is the "What would YOU do" for today - feel free to ponder at will:

I work in educational publishing. Keep this in mind for the rest of the story.
Keep in mind that I am new in my job, so when my boss called me to ask me to take a look at something, I feared the worst. Little did I know it would be the greatest poll/joke/lesson of the day!

Earlier this week, we interviewed a smart young person for a part-time job in our department. He interviewed well, and provided a writing sample, an essay from one of his film studies classes at Northwestern University. All was well. Until this morning, when my boss called.

My boss and I are "un-cool" on similar subjects when it comes to the workplace. We both frown upon low-slung jeans and crop tops as business apparel, shun flip-flops, and so we may be considered "fuddy duddies." But when she showed me the essay, I was pretty sure that about 90% of the building would have agreed with us:

The writing sample, the paper? An analysis of the major sex scenes in a film. A 1986 OK Spike Lee film, to be exact. Complete with riveting descriptions of the sex scenes. Three pages of content chock full of sexual imagery. Did I mention we're a textbook publisher, and that the projects we work on involve neither film analysis nor sexual education?

We both figured we, as squares, must be over-reacting. But everyone I informally polled, from the hippest to the squarest, agreed on two words: Bad Judgement.

Let this be a warning to you jobseekers out there - or an explanation to those of you who can't figure out why, after a great interview, you didn't get the job - you never get a second chance to make a first impression!

The founder of Bookcrossing has a new website called PropSmart, which does for me what I've been doing with real estate listings - Google Mapping them!

It's a little buggy - when I enter, say, 60625, it brings up Lincolnwood - but the beauty of Google Maps lets me just grab and drag south to where I want. Unfortunately, no website can help us afford to live in 60625. Unless maybe one of those "YOU WILL BE A MILLIONAIRE ASSEMBLE DOLL PARTS AT HOME" websites really works.

It's a Z-Pak Attack!

Yay, medicine! I am all azythromicined up and ready for blogging. Today I went to the new Budlong Woods branch of CPL on my way home from work. I used to work down the street from there at the bank. What a nice, pretty library! I'm guessing the new Logan Square branch (Scratch lived next to the empty lot where LS Branch was built) is probably the same. Pretty pretty. You should visit.

I checked out a book by knitting celebrity Vickie Howell. I tivo that Knitty Gritty show and I really don't like her personality very much, but I always learn good stuff, and the fact that there will be a DEAL on her show makes me keep watching. I'm hoping I enjoy the book since it's not an audiobook, so I won't have to hear her talk, and also I can concentrate on patterns and not her high-heels-with-jeans look that I despise. She is like the hipster-knitter I will never be, and don't want to be really. Skully is my knitting icon/muse/teacher. So Vickie Howell can suck on that.

I have nothing funny to say yet. Scrubs was on last night and I was so happy to have it back. Scratch even laughed a few times, which thrilled me because I've always been so pro-Scrubs and since he never watched it he didn't have the same commitment to it that I have. Yay, Scrubs! Yay, Turks!

Don't Ever Get Sick

I have been sick for about a week now. It's that nagging, sore throat-but-no-fever nagging kind of sick. Therefore I am sitting here at 3:30 PM in my Kermit the Frog pj bottoms and Scratch's Modern Lovers tee shirt, because the shirt has therapeutic properties.

The Metro show was AWESOME last night! And not just because we got a little table upstairs, which was such great luck and our reward for getting there early. It was fun to watch people come back to the area we were in, all excited-looking thinking there were tables, only to realize that the remaining seats were all "reserved." Suckas. Like there would be an empty seat halfway through the show that nobody had discovered? We met two youngsters in line to get in, they were adorable and reminded us of how old we were. I personally thought the chick wearing the Tigger fleece headband, no makeup, and who talked about going to House of Blues to see Hanson was super-cool.
Scratch got to see a lot of his friends who still work at Metro - and of course I got to be all "I'm Scratch's wife, how cool am I?"
On the way home, in the cab, we passed two guys standing on the front lawn of one of those mansion-like homes on Wilson east of Western - one guy was puking and the other guy was like, holding him up to help him lean on the tree whilst he barfed. It made me not so envious of those homeowners. Can you imagine puke on your front lawn instead of the garden variety dog crap that's all over?
OK, back to being sick. Scratch's friend is coming over to play Axis & Allies, while I lay around and read, and maybe make a celery hat for Scratch (see knitting pictures below.) 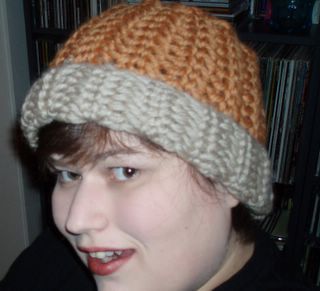 I actually bought a Rowan pattern book for these hats - my first 'shaker rib' project. Onion and carrot. 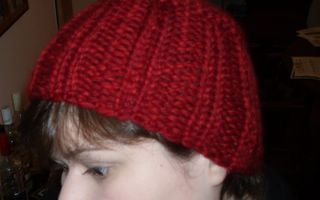 Hat #1 - the non-mirepoix skein of big wool - Scratch will get the same hat from the 'celery' yarn. 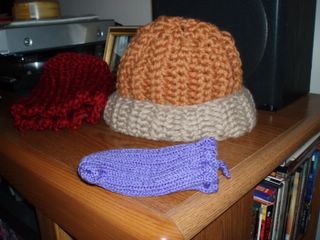 Some of my completed stuff since Christmas - the purple thing is a digital camera 'sock' that I made, modified from the ever-popular iPod sock pattern. I put in a drawstring at the top. 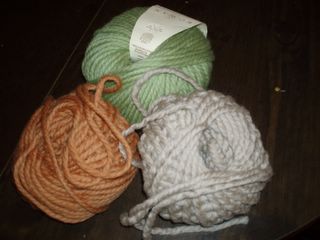 Scratch bought me this awesome Rowan Big Wool for Christmas - ever the chef-type, the colors conicidentally resemble mirepoix!