Could We Start Again, Please?

And Now... The Strangest Tangent...EVER.

And, coming from me? That's saying something. Why, just this morning, Scratch described my penchant for interrupting him in the middle of a story to interject some monologue as my "commercial breaks." But OK, this is a good story:

I like this band called Dungen. I decided to like them after I saw them on Conan a few nights ago. Scratch, being the music guy he is, bought the CD for us the next day, and I listened to it in the car on the way to work this morning. Random thoughts while listening to them included:

OK - so I get to work, and I have a *little* bit of time to check out their website. And I realize that the bass player looks a lot like the guy who played Peter in Jesus Christ, Superstar, the movie version, in the thick curly blond hair department at least. Mmmm, Peter, don't you know what you have said? You've gone and cut him dead. That is my favorite part of the movie. Well, that, and when Peter is all "Hang on Loooooooord, we're gonna FIGHT for you!" Peter was fine. And you didn't have to feel weird about having a crush on Peter, the rock of the church, the way you would feel weird about having a crush on Jesus (Ted Neely.)

SO, anyway - I start thinking I could post a photo of the Dungen guy and a picture of Peter, so I do the whole IMDB thing to find out who the guy who played Peter was. And guess what? GUESS WHAT? OH MY GOD GUESS WHAT?

Peter was played by a guy named Paul Thomas, who has about 10 different stage names, and has starred in, and directed, HUNDREDS of hardcore porn films. "Backside to the Future"'; "Swedish Erotica 1-99"; Aw heck, the whole list is just too overwhelming - and the heavy slant towards 'backdoor' antics was like twisting the knife. And even worse, I can't find a PHOTO of him anywhere on Google, so I can't even see him in his pure Peter state. I wondered why, being the kind of person who watches JCSS every year during Lent, and has since childhood, since it's one of my mom's favorite movies, that I never knew about this! And why nobody else seems to know or care? Until I found my new favorite filmmaker, Atom Egoyan's, awesome little article about Paul Thomas/Philip Toubus at Granta.com.

Please, please, Atom Egoyan. I want to help you make that documentary!

So, that is how a Swedish rock band on Conan O'Brien can lead to the ruining of a childhood crush. And before you even think about it, no, I am not going to rent Backdoor Lust to find out how he's looking these days. Have a great weekend!

I found the shoes...

And, I didn't get a nosebleed. I might have said "Uh..." in front of sentences a little too much. But I think I matched the enthusiasm of my interviewer, and damn, this would be a great company to work for. I'll know more in a couple of weeks.

No big people there - everyone is very young and fit-looking - not in the gross Sex & The City Wannabe or Men's Health subscriber way, but I'm really hoping there isn't a 'no fat chicks' policy.

I'll know in a couple of weeks - which would kill me if I were unemployed, but since I'm not, and I have work to do, and options available, it's OK. Thanks, cheering comment section, for your support!

Why Am I So Nervous?

Due to what I will diplomatically call "Organizational Changes" my current employer is experiencing, I have put myself on the market, so to speak.

Today, I have a job interview. This is the first job interview I've had in many, many years. I am a confident professional! I command the room when I'm doing my job! I am an excellent and creative presenter! So why am I terrified about stupid things like:

What if I get lost?
What if I'm dressed inappropriately?
What if I suddenly get a nosebleed?
What if my shoes aren't right?
And finally, what if they judge me on my plus-sized appearance and immediately write me off?

I keep telling myself:
You can't get lost - this is a huge building downtown. You've been there before!
Your suit is fine. I like the purple striped shirt. Your nude hose is professional.
I've already put some neatly folded kleenex in the suit pocket. Hold your head high.
If you can find the shoes, they're perfect. Unfortunately, I can't find my shoes.
And hey, this is Chicago. There are a lot of plus-sized women who have good jobs right? Right... but reading stuff like this is so depressing.

So, wish me luck. I'm going to go try to find those shoes again now.

Stay off the porch, Chicagoist! Here's the thing about hip hop shows: I'm not a huge fan. The last show I was at featured Kool G. Rap and Ma Barker. Ma was around 7 Months pregnant and jumping around on stage at Metro screaming obscenities into the mike. Not exactly a proud moment for women everywhere, and yes, it turned me off. BUT, if you like hip hop, and go to hip hop shows, then you are used to this kind of scene and the way things go.

Chicagoist wrote this damning article about Ghostface, quoting Pitchfork as backup, to say waaah waah the Ghostface show was a nightmare and I'll never buy a Ghostface record again! And hey, the writers at Chicagoist and Pitchfork have every right to their opinions, and if I got my head split open at a show, I wouldn't be too happy about it, either. But have either of these guys ever been to Joe's for a hip hop show before?

Sources close to Un-Cooler Than You are also way inside with hip hop promoters and performers. Note: That still does not make me cool. And here's the thing:

And there you have it. I'm not saying it was fine for people to get injured instead of "hyped up" but at the same time, if you want to be all badass and hip hop, you can't have it both ways.

So until next time... your friendly neighborhood curmudgeon is signing off, but this is just a really funny site right here.

What are you thinking, Skiles? 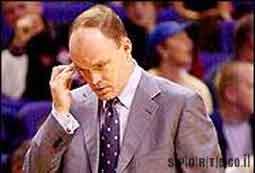 I'm guessing you're always thinking one of the following thoughts:

At least that is what your sour puss is telling me, Skiles! Come on, what is your problem already? And why can't I find more photographic evidence of your 'clasping my head in shame' pose? This photo from The Unknown Column will have to suffice. Sweetney's got potential, Deng is on the mend, and the season hasn't even started yet. Talk to your doctor, ask him or her to prescribe something for those headaches you seem to be suffering, and lighten the heck up! Scratch is watching the game, but I am watching YOU, Skiles. So turn that frown upside-down, or I'll give you something to grimace about!