In Case You Think You'll Never See These People...

I had a brief conversation yesterday while walking Fritz with a guy who looked extremely familiar to me. Well, my suspicions were correct - he's in the Registered Sex Offenders database for my mom's beat. I don't know what he did to get in the database except that the victim was under 18. That's all the info you get. Do I want to assemble a torch-carrying mob and storm his apartment building? No, not really. But did I come face-to-face with a known criminal? Yes. In fact, I'm kind of glad that I knew this because of a database and not because of neighborhood gossip - that's the kind of thing that starts torch-carrying mobs. So, be alert, crimewatchers.

The Ball Is Love

The Ball Is Love. Don't you know that? Last night, Scratch & I bought Fritz some new tennis balls. So far, of the three-pack, one is 'inside ball' one is 'outside ball' and one is 'emergency ball.' Fritz went apeshit, since he hasn't had any new tennis balls in probably a year. We wound up playing late last night and most of this morning before work.
This morning, Fritz thought I was mad at him, because at 1AM he started barking and freaking out and headbutting the back door. So I got up and let him out, and he had diahrrea, poor guy. But then he didn't want to come back inside, and I did get mad, because it's no fun standing on a deck in your nightshirt at 1:15 doing the stage-whisper "FRITZ! Inside NOW! ASSHOLE!" and just hearing his jingly tags racing around the yard not listening.
The ball made it all better. All hail the ball.
I also turned on the A/C in the living room for him this morning, I'm thinking it's too hot for him and that is what is upsetting his doggy tummy. Not too many cookies, or Kraft singles, or hot dogs. No, it's definitely the heat.

OK, so this story? How embarassing is this? Wait, let me get this straight: This guy escapes from jail, apparently by sneaking into the locker room of County and putting on an employee uniform, robs a bank, hooks up with a chick, uses her phone, leaves evidence at her house, gets robbed by some other guy and the cops, who have been seeing this guy plastered everywhere, take a statement and drive him to the el station. This guy can't be too smart, but the police still can't catch him. And hey! He had no ID, so the cops just took his fake name at his word. If only he had been walking a dog off leash with some yuppie assholes - he would have gotten arrested! Let this be a lesson to said yuppie no-leash assholes: Be nice to the cops and they won't arrest you for having no ID. Obviously this dude must have put on some 'yes officer' stuff for them to buy his story hook, line, and sinker.

He's made it through the first two rounds of the day. The players go in 100-minute rounds, with a 20 minute break. He was down, then up, then down again. At least two or three people left the table before he did. The losing hand? Pocket Aces. That's right. Pocket Aces. How could you lose with that kind of a hand? Well, that's why they call it gambling, my friend.

This is the face you're going to see all over those poker shows soon enough! Yeah, I say so! Bill Always Wins!

In case you're wondering: My mom is taking these pictures with her cell phone, and sending them to my sister's cell phone, and my sister is then emailing them to me. She can't talk on the phone during the tournament - so the constant updates I was hoping for won't be happening. Too bad neither of us knows how to text message.

Yeah, Orange Shirt is going down! Come on, he looks and dresses like Garfield, for crying out loud! 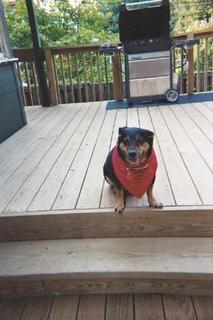 So that Fritz can hang on his 'porch' (what my mom calls her enormous deck) for a little while. Plus, Scratch made me an awesome lunch but I forgot it. Fritz has this whole routine now that my mom is retired where he just hangs on the porch all day surveying the other yards on the block. I felt horrible for having to coop him up inside.

This is a picture of Fritz on the 'porch' wearing a bandanna I bought for him in Disneyworld. He hates it. I think he only wore it this one day.

Have I mentioned that he is the smartest dog on earth? That's why daytime television doesn't appeal to him.

I'm taking care of my dog, Fritz, while my mom and brother are in Vegas. Let me 'splain. No, wait, that will take too long. Let me sum up:
Fritz, the Prince of All Dogs, lives at my mom's with Mom and my Brother. I used to live there too until Chris & I moved into a dog-hating apartment.
My brother? He's in Vegas to compete in the World Series of Poker. Seriously! Send him your good gambling vibes, I command you.
So, me? I am living on fruit alley* in 'historic west edgewater' (aka my old hood) with Fritz until they come back and my brother is a millionaire.

Fritz won't eat his dog food unless you sit in the kitchen with him. Then he will get some kibble from his bowl and turn to face you while he crunches it. A social eater, that Fritz. So we ate our breakfast and chatted, and I read the paper, and didn't find out until I got in the car and turned on the radio that a bunch of bombs went off in London and killed people. The reactionary fearful person in me wanted to call Scratch and tell him not to take the train to work today. Then I realized that's dumb. I'm going to email my friend in the UK today to see what is going on.

*When my dad was growing up, they called our block 'fruit alley' because every backyard had a fruit tree where the garages would eventually go, and kids would ride their bikes down the alley and grab fruit off of the trees.

R You Kidding Me?

So, R Kelly. Everyone talks about him. Justin loves him. The Ignition Remix was a hit at our wedding reception. Scratch has several of R Kelly's 12" singles. I went to Kenwood supposedly at the same time he did*. And now, Trapped in the Closet. Good Grief. Thanks to VHI, I've seen the video in its entirety. Random thoughts on TITC:

I suppose that I 'don't get it' and that this is some kind of ironic cheezy hit that everyone hates to love or loves to hate. But after hearing people call in on different radio stations like "OhmyGAWD THIS is what radio NEEDS, y'all!" and a message board praising RK for addressing the DL, I'm thinking a lot of other people aren't getting it either. As for the rest of his record, the Sun Times review is pretty good.

OK, so as you already know, I enjoy monitoring the HO or JO(hn) website that the CPD is keeping. So far, though, I have noticed:

You don't have to go there, because I am going there for you, Chicago. I am looking at these mugshots and saying "Whaaaaa?" and "Hmmmmm..." for you. Don't thank me. It's my pleasure.

Ripped From the Headlines!

OK, is Dick Wolf one of these secret "5 Guys That Run The World" or something? If Fred Thompson is going to be a part of getting someone on the Supreme Court, does Sam Waterston get to cross-examine?

And If They Jumped Off Of A Cliff, So Would I. Yeah.

So, I went and took that MIT Weblog survey, and posted an adorable button under the links. You can, too.

He Hates Your Dog

FritzT
Originally uploaded by baranpower.
Seriously. Stay away from us. Fritz is 52 pounds of pure power, compacted into his little dachsund/rottweiler body. Puppy school was fine, but then he developed a serious anti-social personality disorder. He loves people, and cats. But no dogs, please.

While we don't like firecrackers after 10:30, we just turned on the A/C in our bedroom to block out the noise.

In other local news, I'm really tired of the 'common sense' laws and people complaining about them. It's disgusting to me that laws have to be put into effect to force people to be responsible members of society (oooh, crotchety old lady rant alert!)

OK, I'm done. There's a reason why this is called the "Un-cooler than you" blog, because I am just SO uncool. Sorry if my un-cool opinions bother you.

Over the weekend at my mom's, while searching for a VHS copy of Flashdance so that Scratch could see it (he's from Pittsburgh, and he's a guy, and yet has never seen the most important movie to ever combine erotic dancing, ice skating, and the Duquesne Incline,) I found a tape that said "NBA Allstar" on the label in my mom's handwriting. We took it home. Last night, we were so psyched to watch it, since my brother had seen us with the tape and said that it was the all star game with Jordan, Pippen, Barkley, and the other Dream Teamers.

Too bad the tape was two hours of All Star Activities but no actual game! I'm guessing Vol. II is floating around in my mom's basement somewhere. Now I'm determined to find it. The highlights of what we did see were Steve Kerr losing the 3 Point shootaround and a tattoo-free Rasheed Wallace playing in the Rookie game.

In other NBA news, Bill Simmons did a recent column on the state of NBA trade values. At the suggestion of Scratch, I'm going to write to him to comment on his Kobe Bryant entry. And, being a woman, it may shock you that the word 'rape' won't be mentioned. My "Dear Sports Guy"-worthy issue is about how phony and sports-opera the Lakers are going to be next season. I'll post the letter, and any response I get, later.

What Else?
We bought a 9 Qt Dutch Oven and new pants on Saturday. I'm wearing my new pants right now, relishing the first-day-wearing-new-pants feel and the knowledge that these pants will never look as new as they do today.
Oh, and we saw Batman Begins. What a great movie! I could do the typical blog entry about the 5 year olds seated behind us unattended, but that's so 'done.' Suffice to say, go see the movie! But don't take small children, it's scary!