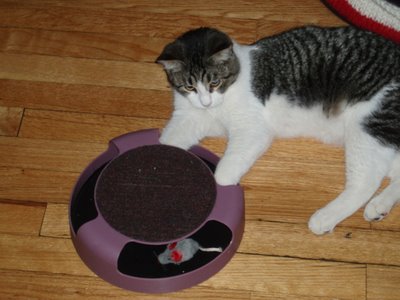 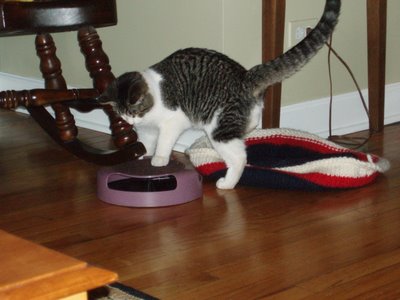 So, if you have a cat, I strongly recommend one of these "mouse in a plastic disc thingy" toys. Herr Whiskers just won't give up on the elusive mouse that spins round and round its center. I think it was $10 at Pet Smart. Note that, in the photo, Senor Barbas is playing near his Memorial Day Weekend cat bed that I knit for him from my unintentionally patriotic yarn supply. Monsieur Favoris is so big (even at the tender age of 6 months) that I will probably have to knit him a new big-boy bed in a month or so.

He has totally jump-started my knitting, I admit. So much so that I broke down and bought that Stitch N Bitch book, where I found out that I have been knitting incorrectly. Supposedly I am supposed to wrap the yarn counter-clockwise in a knit stitch. WHA HUH? I never saw anything wrong with the way I did it, so I found backup to show that I am doing it right, according to some people. So, suck it, Debbie Stoller! Why you trying to break my knitting spirit?

Mr. Whiskers Appreciates Art
Originally uploaded by baranpower.
The cat is already cooler than me.

Mr. Whiskers Has Joined Us For Tea... 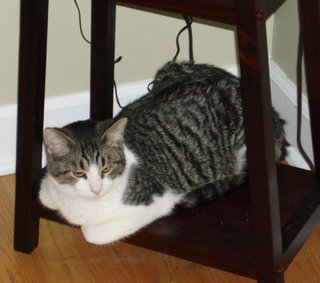 and a lifetime of petting! This is Mr. Whiskers. His shelter name down at the pound was "Chubbs" but I think that's a mean name. So Scratch named him. In fact, Scratch fell in love with him at first sight. It was a match made in heaven. So far, Mr. Whiskers is mostly chilling out and trying to figure out where he is and what we are, and why we are so desperately trying to play with him so much. "Entertain us, Animal!" we shout, but he does not care. So, why our pound is worth the trek (for some) to 28th and Western:

1) Clean. Very, very clean.
2) Ample Parking
3) Friendly, Courteous staff and volunteers.
4) CHEAP - Mr. Whiskers is neutered and up-to-date on all shots. His adoption fee was $65.
5) Heartbreak is minimized by having a small cat room separate from the dogs.

So if you are considering adopting a pet, head on down to ACC! They are open every single day from noon-7. Me, I'll be busy taking cues from Skully and knitting up some kitty wontons and a bed for Monsieur Whiskerrrs...