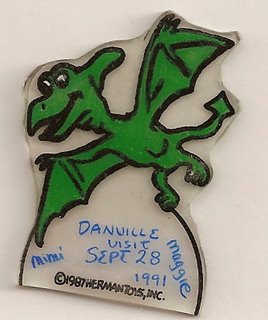 I just can't wrap my mind around blogging lately, but here are some Andy Rooney-esque observations I've had in the last few days.

What do you do with old VHS tapes? The ones that maybe you taped Big Sandy & The Fly Rite Boys when they were on Conan in 1994 on, but then there's nothing else on the tape? Or maybe you taped Law & Order one night before you got TiVo? I'm throwing them away, but I feel weird about it. Thanks for the memories, VHS tapes. And why the hell did I tape Night After Night with Allan Havey so much? It's not like I was ever the audience of one.

I got an email from the "Allstate Arena Insider" offering me presale tickets for Jerry Seinfeld. Seinfeld? In the same arena I saw Prince at? And Foo Fighters with Weezer? Come on. What kind of laser show will Seinfeld have?

Skully has a kicky new hairdo. Dig it babe, I need a new look before I start my new downtown job on Monday. When will I have time to do this? I will have to MAKE time, my friends. MAKE. TIME.

Justin is soliciting Chicago History suggestions to impress some visiting friends. It made me think about the cities I've visited people in. You know what I remember? Bizarre shit that happened with my friends. I don't remember the Arc D'Triomphe as well as I remember walking around Paris at 2AM with my friend Abra and being absurd and drunk as hell. I don't remember the Tower of London as much as I remember sitting in the woods of Basingstoke with my British pals. And I certainly don't remember Danville, IL as much as I remember Skully and I making Pee Wee's Playhouse Shrinky Dinks (look, I even still have one!.) Don't stress on it, Justin. Take your friends where you like to go and they will have just as much fun.

Now it's back to packing up stuff. Stuff stuff stuff!