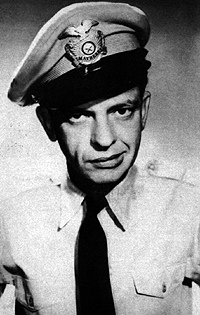 I first heard the term "Urban Mayberry" from my friend Jeff when we both lived down in Wicker about 12 years ago. At that time, if two people were walking from Big Tony's to Hito, someone would have to stop on an average of once per block to say hey or catch up with someone else walking the opposite way. I'm sure it's still like that, except now people walk from the Diesel Boutique to the Potbelly's.

I use the term now to describe the fact that my husband could meet some friend at a show and then later call me to tell me that his friend's girlfriend's best friend works at the same company I do. Or that I ran into a good friend at the bank over the weekend. It's just like Trixie Belden's life, except that I don't solve crimes or have an "irish twin" brother.

So is it a good thing? Sometimes I live in fear that my boss will have dated someone I went to grammar school with and therefore my career will be based on that person's 4th grade estimate of me - which could also kind of could blow in my favor, in which case inviting everyone in class to my birthday party really paid off.

Last night, Scratch and I walked over to the Kalbi BBQ (two word review: tasty, pricey!) and met some work friends of mine who also live within a few blocks of the Admiral Theater Entertainment Capital of the World. By the way, if this becomes someplace hip to live I don't want to say I live in "Albany Park" but instead we live in "Admiraltown" or something. ANYWAY. It got me thinking this morning about Urban Mayberry.