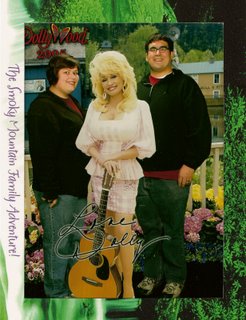 Even though we were only gone for a couple of days, there's no way I can fit everything we experienced into one post. So tonight I will just give some impressions, and then elaborate more when time permits.

Knoxville, TN: Beautiful, new airport. Perhaps the only thing missing is a breakfast option. We flew home early this morning, and just weren't in the mood for Ruby Tuesday's at 8AM.

Pigeon Forge, TN: Have you ever been to Wisconsin Dells? How about Branson? Then, folks, you've been to Pigeon Forge. I have som fun pictures of 'the strip' that I will share later in the week.

Dollywood! What a nice, clean park. Unfortunately, many of the craft-based attractions were closed for the season - that seems to be the heart and soul of the park. It was Christmas in Dollywood time, which meant everything was head-to-toe Christmas lights, angels, and references to the Baby Jesus. It was seriously enough to annoy Jesus himself.

Anyway, I want to get to the weekly SkilesFace nominations... so to keep your interest for future TN posts, I give you this photo of us with the queen herself! I'm very disappointed in my hair for this picture, it's very helmet-y. But how could I ever look glamorous next to that anyway? It wasn't worth trying too hard for.