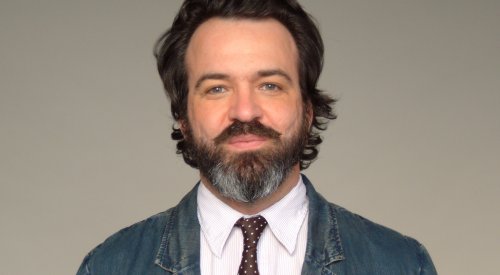 So what is the crush that I have on Joe Pernice, exactly? Here is my Joe Pernice timeline: About 1 Year Ago: Scratch has "Discover a Lovelier You" - I enjoy it. One of the songs wound up in a Sears commercial later and I remember being all "Good for them! Money!" About 5 Months Ago: I read that Nick Hornby collection of book reviews, where he mentions that Joe Pernice wrote a novella called Meat is Murder. Scratch tells me all kinds of cool stuff about Joe Pernice and why he is so cool. Last Month or So: I can't stop listening to Discover a Lovelier You, and I find the novella and read it. And it's awesome. I listened to my Meat is Murder album on the turntable after reading it. When his narrator used lyrics from the songs, I would get all stoked. I had developed a lovely little crush. But I'd never seen him. Seriously! I had no idea what he looks like. So then I conjured him in my head: Kind of Scratch-esque, but with a beard? And wearing baggy jeans and a tweed jacket? And really into sending me poems or singing to me or whatever 12 year old crush fantasies involve. I've never watched an episode of Gilmore Girls, until last night. Because, in addition to Sonic Youth and The Sparks and some bands even Scratch had no idea on, Joe Pernice had a 20 second spot on the show. And Guess WHAT? He has dark hair. He has a beard. He wore baggy jeans and some sort of jacket. While not Scratch-like at all in appearance, he was a bit more like a young Elvis Costello. Fine with me. I was expecting to be really disappointed.

Now that I've killed the mystery, my crush is subsiding. It was more fun when he looked like some bizarro world version of my husband. Sorry Joe, I won't be sneaking out to have coffee with you during my lunch break. No... don't cry. It's for the best.

PS No Scratch, I don't want you to grow a beard.

Comments:
You're in for it now.