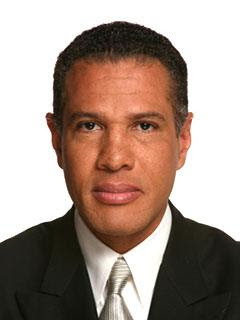 OK, so if you watched the Bears post-game you may have been (un)fortunate enough to capture the incredibly bizarre coverage outside of Soldier field by FOX's own Byron Harlan, wearing a full length leather trench coat and acting really, REALLY excited:

Byron (to group of guys): "So Lovie Smith will be the first black NFL coach in the Superbowl! Tell me, do you love the black man?"

At this point Byron shoved the mike into the face of a bundled up middle aged white guy.

White Guy: "Sure I love him. He should get a raise! They need to pay him!"

Byron then went on to another "love the black man" statement before he got cut off. It was weird. Was he doing a Jerry Maguire bit where he was the only one in on it? "Come on! I'm Rod Tidwell! You be Tom Cruise!" Or was it just a strange thing to say?

Because I work in the same building as FOX Chicago, I see this guy all the time. I am wondering if HE will get his own joke if I say "Hey, I love the black man!" to him in the pedway. What do you think?

Comments:
Yes! Do it. Ask him to his face and see how he reacts. That was sooo weird...