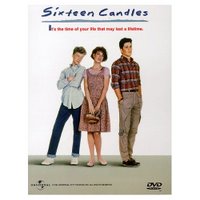 Over the weekend, I watched the John Hughes classic Sixteen Candles on cable. Mostly because nothing else was on, and it was nice background while I finished the back panel of the sweater I've been working on since, oh, April or something for Scratch.

I hadn't seen it in years. And as I half-watched and mostly listened, I heard things that really made me re-think the worship of these teen movies. Like the part where Molly Ringwald's character says "Yes you're a total fag." And then later Farmer Ted tells his friends to stop acting like "faggots." Not to mention the total gross-out look Sam and her friend swap when Sam says "A black one." The friend says "A black GUY?" and Sam was all "No a black Trans Am. A pink guy." Ha ha ha. Like anyone in a John Hughes movie would date a black guy! And while "The Donger" is this time-honored and oft-quoted character, the way he was treated by the white upper-middle-class adults was pretty crappy and ignorant. Was that the point? Or am I just overreacting to a beloved comedy of my generation? Am I too old to like it anymore?

It made me realize how much I hate the way "gay" is used as a derogatory adjective - how to a lot of people it has a life of its own apart from real homosexuality. And I guess in the time and place where these movies were set, that was totally normal and how kids "really" talked in the mid-80s, that being gay was the worst possible thing imaginable, and how there are few, if any, black or gay characters in any of the John Hughes catalog. The same way I guess there weren't any black people or gay people in that community. It made me kind of sad. I'm not trying to act all superior about it, because I loved this movie, and The Breakfast Club, and Pretty In Pink, and Some Kind of Wonderful. But I just never realized that the protagonist characters used pretty much the same vocabulary you'd expect only from the 'bad guys.'

I wonder if people a little older than I am who have budding teenage kids show them this movie and are all "THIS was the greatest movie when I was your age! It's totally what high school was like!" and their kids are all "Geez Mom & Dad, you sure were some racist homophobes!"

It makes me realize why "Politically Correct" language was so important, backlash be damned.

Sorry for being a Debbie Downer on our teen memories, but hey - would you talk like that now?