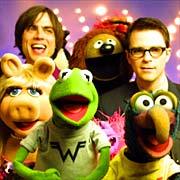 So, last night we had our asses rocked by none other than WEEZER. But this was not the loving, bespectacled, muppet-lurving Weez, it was the pyrotechnic, hard rockin', lasik surgery havin' Weezer. They played inbetween The Kaiser Cheifs (who reminded me of Adam Ant) and Foo Fighters. Thoughts:

Enough bullet points. Back to work!

Comments:
I am making a note of this band the Kaiser Chiefs. Adam Ant you say? I'm so investigating them!!!!!!!!!!